"Daniel is now 4 years old. He was diagnosed at around 4 weeks with a severe to profound sensorineural hearing loss, which has been found to be caused by Connexion 26 gene.

"We first met Julie from The Elizabeth Foundation during Daniel’s hearing test appointment when he was diagnosed. We can remember our heads were spinning but she reassured us that help was there. Soon after, we were contacted by our local Sensory Support team on the Isle of Wight. They arranged a home visit for us to meet his wonderful and supportive Teacher of the Deaf and communication support assistant, who have provided us with invaluable advice and endless help over the years.

"The week following diagnosis we made the journey back over to Portsmouth to meet with Julie again and this time have a good look around The Elizabeth Foundation. From this day we both realised that we wanted Daniel to join the baby group and benefit from all the wonderful teachers, assistants and speech and language team at the Foundation.

"From then on we started our weekly trips across the Solent, shortly after Daniel was fitted with hearing aids in the March. We found it so helpful and reassuring being part of the baby group, meeting and talking with other parents in the same position, as well as the team.

"As Daniel grew, he became more interested in what we were doing in the class each week, enjoying the music and games. It was so beneficial for us to learn new skills and ideas that we could try at home to help him to learn to listen and speak. However, we were never exactly sure how much he was hearing through his aids, as sometimes it would it seem he was not responding to us at all. Then one day in baby group that always remains with me is the day he had his audiology appointment and was given more powerful hearing aids. I remember we re-joined the group following his appointment and I sat him in the middle of the circle and he looked stunned, like something completely new was happening to him!

"We then moved onto toddlers, which came with more routine, independence and a topic to focus on each term, starting to prepare him for the structure of the preschool sessions.

"We noticed quite quickly that Daniel is a boy who loves his routine and to know what is going to happen next. During this time in toddler group, as more of his friends were having cochlear implants, we were starting to think again as to how much access to speech he was getting. This was when, with help of The Elizabeth Foundation we requested his audiologist to put him forward for CI assessment.

"Following a long assessment process with its up and downs due to his hearing being borderline in one ear (due to the guidelines at that time) we were finally given the good news that he was eligible for cochlear implants. He had the operation in January 2017 (one week before his 2nd birthday) and has since gone from strength to strength in his learning to speak and listen.

"He moved up to Rachel’s preschool class in the September that year along with some of his friends, which took the routine and independence to the next level. He still gets so excited in the morning that he is going to preschool and understands that he gets to go on the ferry.

"I am often told that we are admired for making the weekly journey across the Solent (in almost all weathers and usually only being stopped by a cancelled ferry!) but for us it is an easy journey and easy decision to make because of the way Daniel has progressed and learned vital skills in preparation for starting school.

"This has truly been down to the wonderful team at The Elizabeth Foundation and his support team here on the Isle of Wight."

"It was so beneficial for us to learn new skills and ideas that we could try at home to help him to learn to listen and speak..." 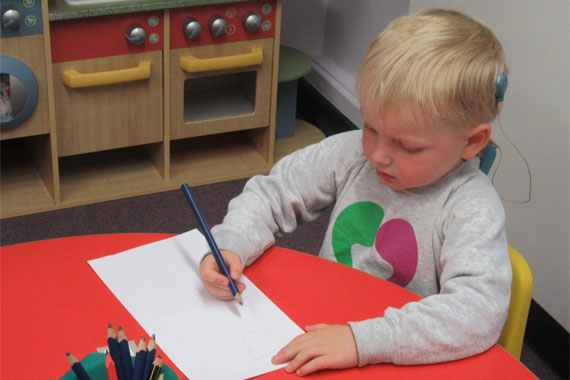